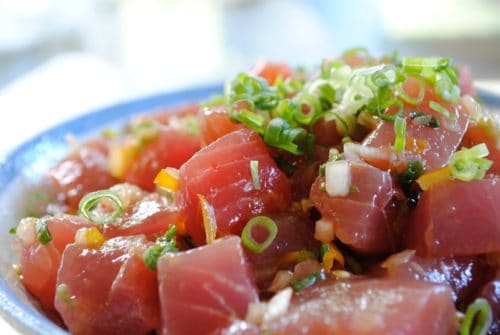 On August 30, 2016, Chicago-based restaurant chain Aloha Poké Co. secured the registration for the trademark “ALOHA POKE” for use with restaurant services by the United States Patent and Trademark Office. Aloha Poke’s primary culinary emphasis is on the traditional Hawaiian dish known as “poké”, which is seasoned raw fish, served over rice.

In January 2018, restaurants across the country who use the terms “Aloha” and “Poké” in their name—including those with other words in their names—began receiving cease-and-desist letters from attorneys representing Aloha Poké Co.

As poké restaurants in Hawaii began receiving these letters, many native Hawaiians began to question the ethics and validity of the trademark, which uses words that are common in the native Hawaiian language. The issue was brought to the forefront of Hawaiian conversation when Dr. Kalamaoka’aina Niheu, a Hawaiian activist, posted a video about the letters on Facebook that went viral.

In addition to being a nearly universal salutation among Hawaiians, “Aloha” is considered by many to be a concept that has deep cultural and spiritual significance to native Hawaiian culture. The cease-and-desist letters sparked outrage among native Hawaiians, who consider the company’s actions to be an unethical appropriation of their language and culture by a non-Hawaiian entity. As this outrage grew, many Hawaiians took to social media to express their dismay, not only to the company, but also directly to Aloha Poké Co. founder Zach Friedlander (who is no longer with the company).

“We call upon Aloha Poke Company, LLC to “cease and desist” from the use of the words “Aloha”, “Aloha Poke” and “Poke” from all current and future businesses. We believe the words “Aloha” and “Poke” belong to the whole Hawaiian culture–not to a U.S. company in Chicago. We understand that this will come at some cost to you, but we think that cost to a multi-million dollar company is comparable to the cost that you have asked these small families to suffer when you have demanded they remove theirs.”

The backlash from the controversy has since spread outside of Hawaii. Multiple protests are planned in Chicago. On August 10, 2018, the Aloha Center Chicago plans to protest in front of Aloha Poké Company’s corporate headquarters, as well as a march in Chicago’s Loop planned for Monday, August 13th, and protests planned for August 15th at the restaurant chain’s Lincoln Park location.

This controversy is an example of what can go wrong when your legal strategies aren’t well-aligned with your branding and marketing strategies. It is an important reminder to take a more holistic view of your business when you consider enforcement actions, particularly those with the potential to turn into viral movements.